John Cantelo and Brendan started at Oldstairs where there was no sign of last night's Red-rumped Swallows and walked to Bockhill Farm Wood and back. It was predictably quiet with the highlights being, three Grey Partridge, two Swifts, 9 House Martins and 11 Swallows.
Posted by Richard Heading on May 26, 2018 No comments:

A Hobby flew past the house around 16.00, then about half an hour later a flock of hirundines started feedingover the area between Northcote Road and Oldstairs Road. Given the paucity of House Martins this Spring it was remarkable enough that they comprised of approximately 40 of this species, but then a Red-rumped Swallow came into view. As other birders arrived to enjoy it, one became two and they stayed in the area until 20.45 when the flock headed off towards Deal. I know it's not a really rare bird, but we don't often have things that stick around and are twitchable!

In the evening, Nigel and Gerald managed to see an adult Long-tailed Skua which was tracked off the Kent coast from Dungeness eastwards.

Not only is this an exceptionally poor Spring, but it is getting late for large numbers of migrants and the wind has been consistently from the North for several days. So I was not overly optimistic when I set out this morning. However a Spotted Flycatcher in the Paddock closely followed by five fly over Crossbills was encouraging. There was little else to get excited about as I walked the clifftop to Little Green apart from 11 Swallows heading North. Returning past Hope Point I picked up a singing Marsh Warbler, which only gave three brief glimpses in the two hours I spent with it. No photos sadly but I managed a couple of sound recordings on my phone. Other birds noted two House Martins at Hope Point, 14 Whitethroats holding territory, four singing Chiffchaffs, two Lesser Whitethroats 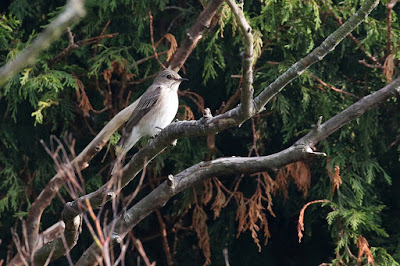 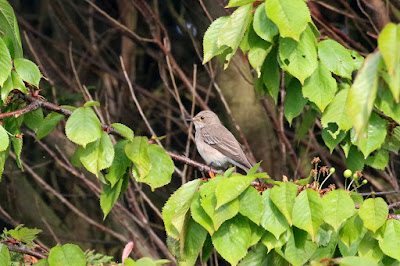 A brisk northerly wind didn't offer much hope but inspired by the arrival of new rarities in the north, I mistakenly thought it was worth a visit to Bockhill. An early morning sea watch produced a single dark phase Arctic Skua but nothing else. "Up top" produced nine Whitethroats, four Chiffchaffs, and three Blackcaps, all presumably local breeding birds. Highlight was a Turtle Dove which flew North past the empty wood and a grant total of seven Swallows going North. Returning to the sea with Chris Cox, produced two Common Scoters, 17 Sandwich Terns, a Whimbel and three Sanderling
Posted by Brendan Ryan on May 16, 2018 No comments:

Well, it's been a bit disappointing to be honest for May. 1 Hobby & 1 Yellow Wagtail were today's highlights, although our first Green Hairstreak and Small Copper were welcome distractions. Some of the Early Spider Orchids are still going strong. Jack & Nigel (photos) 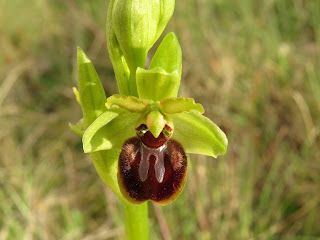 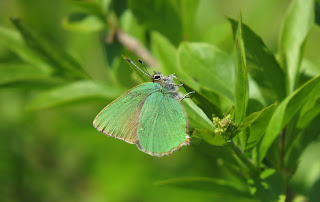 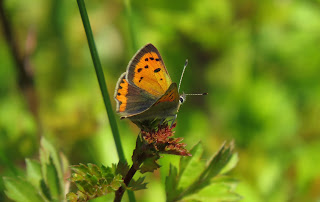