From 08:00 - 10:00 a seawatch in the Bay produced 194 Gannets down channel, two Whimbrel, four Mediterranean Gulls and 15 Swifts. After being joined by Phil we walked around the area but had no migrants apart from one Reed Warbler.
Posted by Jack Chantler on July 31, 2018 No comments:

Nigel and I did a seawatch from 09:45 - 11:00 this morning and had 134 Gannets and a Balearic Shearwater moving down channel, other than that there were very few birds apart from four Mediterranean Gulls on the rocks and a Shag fishing close into the beach.
Posted by Jack Chantler on July 29, 2018 No comments:

Early morning conditions were very different to most days in the last few weeks. Much breezier from the SW and significantly cooler. Five Willow Warblers, four Lesser Whitethroats and eight Whitethroats across the golf course. Little else was across the area and the wind was increasing so Phil, Jack and I descended to St. Margaret’s Bay.

Two of the first birds we saw at 09.50 were Balearic Shearwaters which moved extremely rapidly up channel. Over the next three hours we had seven Common Scoters and a Whimbrel down channel, 19 Mediterranean Gulls, including a colour ringed individual, two Gadwall and two Shags. Overhead and out to sea Swifts were moving. We were up to 1 404 by the time we left. As I sit and write this now at 1500, they are still going in small numbers. A Common Seal and a Grey Seal were also present in The Bay.

Willow Warblers are starting to come through in small numbers now. 15 were at the bottom of Queensdown Road throughout the afternoon and a Garden Warbler was also present. On the Golf Course a Turtle Dove was singing early in the morning and a Hobby flew over.
Posted by Richard Heading on July 27, 2018 No comments: 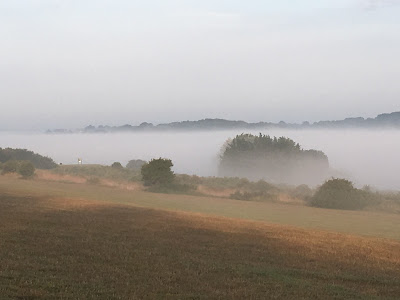 The early morning mist was hanging in the dip between Kingsdown and St Margaret’s this morning. This week has seen the first signs of autumn migration. A pair of Turtle Doves were near The Rough for a couple of days but appear to have departed now. A Cuckoo was on the golf course along Granville Road and a few Willow Warblers have been in the area. Hopefully we will have another post in less than a month’s time!
Posted by Richard Heading on July 19, 2018 No comments: