Today, in past years, has been our best for autumn rarities but it did not live up to expectations this year. We did however have a couple of Yellow- browed Warblers outside of Bert's garden.
Other notable birds around the area were four Stonechats, a Black Redstart, two Blackcaps, 107 Chiffchaffs, 109 Goldcrests, a Little Owl, four Great-spotted Woodpeckers and a Hobby chasing the moving finches over the Leas.
Overhead most of the morning there was a steady SW movement of birds consisting of 65 Swallows, 12 Alba and one Grey Wagtail, three Rock Pipits, five Brambling, 142 Chaffinches, 92 Siskins, 13 Redpolls, four Reed Buntings and a single Snow Bunting.
Butterflies included many Red Admirals, a Common Blue, a small Copper and three Clouded Yellows. Julian,Malcolm,Nigel,Phil,Simon,Steve,Richard,Jack. 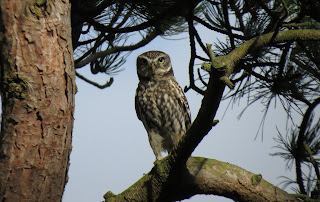