At Kingsdown undercliff there were two Ravens being harried by a Peregrine and out to sea a Great Skua chased after Gulls.

Jack
Posted by Jack Chantler on December 31, 2018 No comments:

Phil and I met at Kingsdown undercliff where we had three Stonechats and many Auks, Cormorants and Gulls. We walked up Oldstairs Road to Richard's and had two Firecrests and a Waxing flying west. Earlier Richard had a Crossbill and 40 Redwings.
In his garden he had a male Blackcap and in Nigel's garden there was a female Blackcap.

Posted by Jack Chantler on December 31, 2018 No comments:

Gerald, Nigel and I had a seawatch for two and a half hours in the Bay this morning and recorded
55 Red-throated Divers, a Black-throated Diver and two Great Skuas moving down Channel.
Offshore there were 12 Great Crested Grebes, an Eider Duck, 57 Auks, of which most appeared to be Guillemots, and at least 273 Great Black-Backed Gulls.
Also a Common Seal and a Harbour Porpoise were just off the rocks and a Grey Wagtail fed around the cars in the carpark. 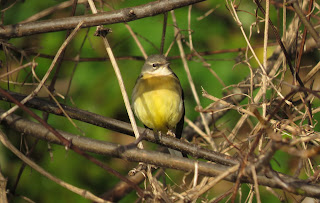 A seawatch from 08:00 to 10:45 produced lots of birds of few species. There were 394 Cormorants, one Shag, 22 Red-Throated Divers and one Great Northern Diver, 50 Auks, 40 Fulmars and three Great Skuas.
Offshore following a couple of large trawlers were at least 2000 birds of which probably half were Gannets.

Nigel, Jack.
Posted by Jack Chantler on December 09, 2018 No comments: